What I Learned About Parenting From the Dog Whisperer

LESSON ONE: When a pack leader dies and no one steps up to take the vacant position, the surviving dog can fall into insecurity, anxiety, nervousness, fear and possessiveness. The dog learns to control its owners with her fear, doing a lot of dominate behavior.
PARENT APPLICATION: When parents don't take the lead in the family—set clear expectations, boundaries, and discipline—, their children can feel insecure, anxious, nervous, afraid, and possessive. They feel the role of leader is vacant and they step into it, controlling their parents with their own fear or nervousness or anger. This could also be applicable to young ladies who grow up with a strong father and then marry a passive or insecure guy.
LESSON TWO: Dogs react to their owner's energy. New situations represent a positive or negative experience to the dog. The dog looks to the pack leader to understand what to think of these experiences. Owners often create their dog's bad behavior by feeling stressed or tense themselves. In order for the dog to calm down, the human had to calm down and be in control of their feelings.
PARENT APPLICATION: All children's negative behavior isn't due to their parent's fears, but a parent can set the tone for how a child ought to feel about a new situation. If the parent is nervous, the child can sense that and feed off that.
LESSON THREE: A correction must be followed by relaxation, not more tension. If you have a bad moment, don't focus on those two seconds of instability. We have more success than unsuccessful moments.
PARENT APPLICATION: Uh . . . isn't it quite obvious. 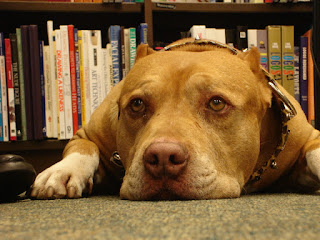 LESSON FOUR: When a dog didn't have prey, it went after other dogs. It's frustrated energy destroyed things. With a fake squirrel in its mouth, it didn't go after the other dogs. The owner needed to direct the dog's aggression, which wasn't a bad instinct in the dog. When a dog attacks another dog, it's an opportunity to rehabilitate. If there's no attack there's no chance to teach.
PARENT APPLICATION: Some boys (and probably some girls too), need an outlet for their energy or fighter-instincts or whatever you want to call it. When they've had an opportunity to direct their energy elsewhere, they'll be less likely to attack their siblings or destroy things in the house. If and when they do fight or destroy things, use these opportunities to teach.
LESSON FIVE: When entering a new environment, the dogs will look at their owners and follow their energy. At a dog park, assess the situation, look and see what it's like. Walk around as your dog introduces itself to other dogs and notice how your dog reacts with other dogs. Don't let these encounters mean anything. Show them that you're not phased by it and keep walking.
PARENT APPLICATION: It's okay if my child doesn't get along with all the children on the playground. I don't have to let the negative encounters mean anything. My kid will find his or her own set of people naturally. Also, it's helpful for me to show my child around a new environment so they understand the boundaries and expected behavior.
LESSON SIX: Don't remove all the off-limit items. That's enabling the dog. Expect the dog to respond to your command instead of taking the choice away.
PARENT APPLICATION: Again, I don't think this needs an explanation.
LESSON SEVEN: In a situation with a rescue dog, don't feel sorry for the dog. Your guilt and pity is communicating a wrong kind of energy. You communicate that there's something wrong with the dog, and there's nothing wrong with the dog. But if you believe it, they believe it.
PARENT APPLICATION: Allowing my own fears from my childhood to creep in and create guilt and pity towards my children isn't going to help anyone. Best to work through that with the Lord and not my children.
LESSON EIGHT: A healthy pack allows a nervous dog to feel more comfortable. Best to ignore the nervous dog instead of rushing in because we feel sorry for them. The nervous dog will look around at all the other dogs and see that they're not stressed. Then the nervous dog will start acting like a normal dog.
PARENT APPLICATION: It's good for my children to see that other children are expected to do chores, eat what their parents fix them for dinner, participate in activities, and sometimes lose at games. It helps show them that they don't need to freak out. These situations are normal and they needn't fear. This is true for adults too.