Why God Didn't Create a World as Cool as the Movies 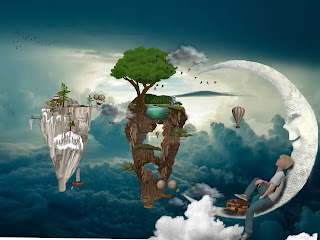 After seeing a really cool movie, or playing a super creative video game, I sometimes feel like earth is kind of boring? Take the Marvel world. Its super heroes are way cooler than earth's heroes. Don't you think? Why weren't we given super human strength to punch things great distances, lift cars with our red-swirly-forces, fly or breath in space? Take Star Trek or Avatar or Star Wars: why can't we travel to distant planets and discover other civilizations?

It sounds wrong to say, but is this earth really the best God could do? Do we really have to satisfy ourselves with the Grand Canyon and glaciers and volcanoes and electric cars? And if so, why can we create more interesting worlds in games and movies? Did God mean to make earth so much less exciting than the worlds we can imagine?

Here's how I've come to answer that:

First, God is not threatened by our creativity, and in fact, he made us to create.

God has given us some basic tools—the chemical elements, the laws of physics, our own minds, and the laws of morality—and he wants us to build with them. It's like he's handed us a tool box and said, "Here. Let's see what you can come up with. The sky's the limit." (Well, in this case, the sky is not the limit.)

So when humans learned to extract iron from iron-ore, when they invented the steam engine and the light bulb and the telephone and computers and rockets, we were acting with God-like creativity. It's not that God couldn't have made an earth with all these inventions already present, but that he desired us to create or discover them ourselves. He is sharing the act of creating with his creatures.

Second, humans have a tendency to ignore God's laws when creating.

Every time we watch a fictitious movie or play or video game, we have to suspend our beliefs. That is, we have to ignore the fact that human beings don't behave like that; that matter doesn't act like that; that things don't happen so fast in real life. There's nothing wrong with creating fantasies, so long as we recognize that that's what they are: fantasies.

But before you feel like God is squashing all your creativity, I also think that we were made to make these fantasies a reality that can exist in accordance with God's laws. But this will take time and wisdom.

We have to be well acquainted with the way the world actually works in order to start manipulating it so we can breath underwater, walk through walls, hear each other's thoughts, fly through space, re-create dinosaurs, or lift cars with one hand.

Our current inventions—electric cars, returning rockets, remote control space rovers, organ transplants, artificial limbs—were built upon many hundreds of years of research and discoveries. People discover things, publish their findings and then pass them on to the next generation. And seeing as we could spend a lifetime studying one detail on this earth—like ice thicknesses or the migratory pattern of sea turtles—we just don't have the time to create what our minds imagine.

We must have been made for eternity. And all this creativity is giving us a foretaste for what living with God for all eternity will be like. To create is not only God-like; it is also nourishing our longings for heaven.

So imagine away. And remember to learn God's laws too for they will help us create truer, more ethical, and more beautiful creations.