I’ve thrown out my old contact boxes, storage cases, and eye drops. I’ve folded my glasses, slipped them into their pouch, and stored them under the bathroom sink. And I’ve got my eyedrops calendar on the kitchen counter and my CareCredit monthly deductions scheduled to come out of my bank account every month.

Just like that. A forty minute free consultation, a trip to Rite Aid, a week of fish oil and artificial tears, a few days of steroid and antibiotic drops, a pre-op exam, and a surgery—if you can even call it a surgery. The operating time lasted no more than 20 minutes and I was awake and watching the entire thing. Lasers. On my eyeballs. Weird.

I have yet to feel the impact of the procedure. After all, I’ve merely eliminated putting in and out contacts every morning and night. This isn’t like Gretchen Stevens getting a cochlear implant or Jesus’ healing of the blind man. Post-op, my eyes see just as well as they did when I wore contacts, slightly better actually. However, now the correction is permanent. No more glasses or contacts. And water sports are an option. Oh yes, and mid-night wakings to comfort crying babies can be done with more ease. I’ve cut out some hassle. But the surgery is considered cosmetic. That’s why most insurance companies won’t pay for it.

During the consultation, Ashley Cordova, my patient counselor, had me look into several machines: one that brought a brightly colored hot-air balloon in and out of focus, one that surrounded my face with bright blinking orange spots, and one that looked like a 1980’s computer game traveling through a tunnel. They measured the thickness of my cornea, the consistency of its topography, the degree of my nearsightedness, my astigmatism, and probably other things that I don’t understand.

My eyes qualified for the procedure, so did my health, and eventually my will. Although signing the papers was probably the most difficult part because I DID read every bit of information given to me and was rather aghast about all the possible risks and side effects: infection, droopy eyelids, scarring of the cornea, permanent dry eyes, loss of vision, and death. Death! Really? I had flashbacks of signing all the wavers prior to skydiving with Auntie Terri ten years ago.

It was a mind-over-matter decision. No. It was more like a close-my-eyes-and-sign-on-the-dotted-line decision. I’m glad I did.

Philip drove me to the operation last Friday. By the way, he doodled the drawing at the top while in the waiting room. The lasers didn't actually look like this. Dr. Rude, who is anything but rude, ran through the same tests that I’d previously undergone to be sure everything was good to go. In addition to this, I had my eyes examined on a refractor while answering those questions about what’s easier to see—one or two, three or four, five or seven. I wondered if there was any pattern to the numbers that Dr. Rude was giving me. 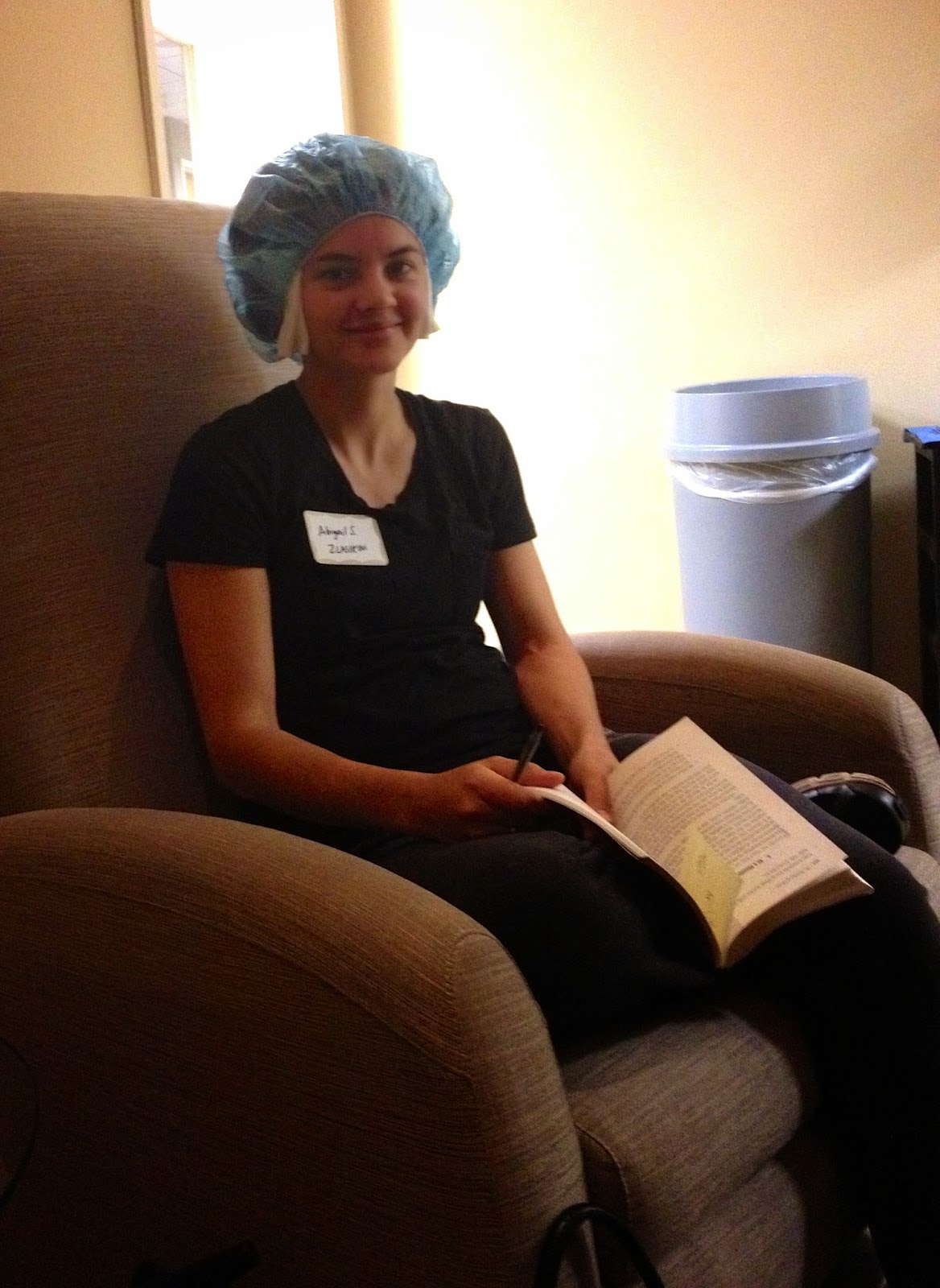 Phil and I watched a video on the office ipad about what was going to happen next. Then Dr. Lusby, a Harrison Ford look alike, met with us and repeated what the video had said. Focus on the green light. Don’t look anywhere else. Nothing else matters.

Then I got my shower cap and ear guards, my eyedrops, half a sleeping pill, and an in-flight snack provided by Dr. Unrude.

I went to the operating room while Phil went to a waiting room with a TV screen of a close up of my eye. He filmed a portion of the procedure. Don’t watch if you’re squeamish.

The operation went something like this. They dropped numbing drops in my eyes, spread open the lids, and dropped down the Ziemer Femto LDV Laser to make the corneal flap. This step was the most uncomfortable of the procedure as I felt a great amount of pressure around my eye and I had to keep as still as possible while having nothing to focus on but gray-black nothingness punctuated by colorful stars.

That done, my vision returned, though blurred. I focused on a green blur while they put the WaveLight EX500 into place. This was the laser that was to correct my nearsightedness and astigmatism. Again, Dr. Lusby told me to keep focused on that green light while the WaveLight worked. I was comforted by the knowledge that the laser tracked any movement of my eye, and would automatically shut off if my eyes weren’t still enough.

That was it. I sat up, took a picture with the doctor, and had some attractive plastic eye guards taped to my face. I went home and slept through the worst part of the pain. Post-operative guidelines require continued use of my eyedrops and no eye-makeup for a week. No racquetball for two weeks. And no skydiving or rubbing my eyes for 3 months. It’ll be tough, but somehow I’ll manage.

By the way, having dry eyes and seeing halos around lights at night are reportedly common symptoms after surgery. So far, I have had little to no experience of this. 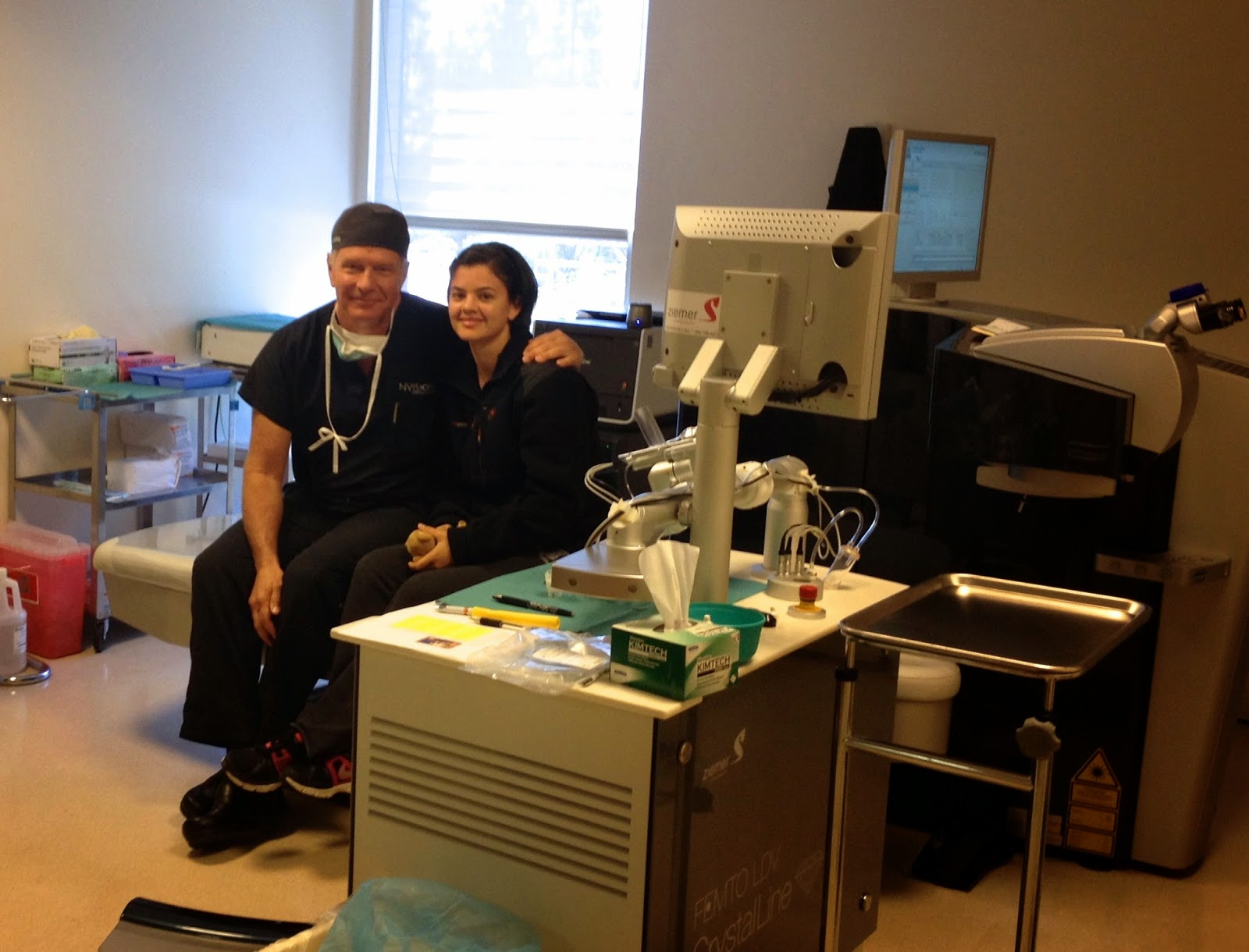 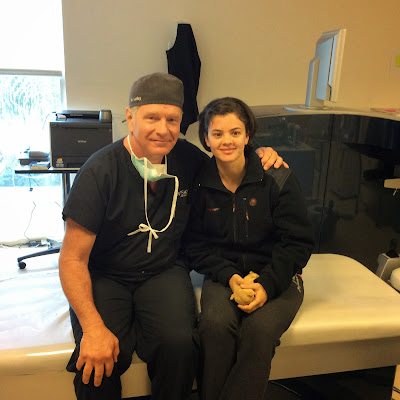 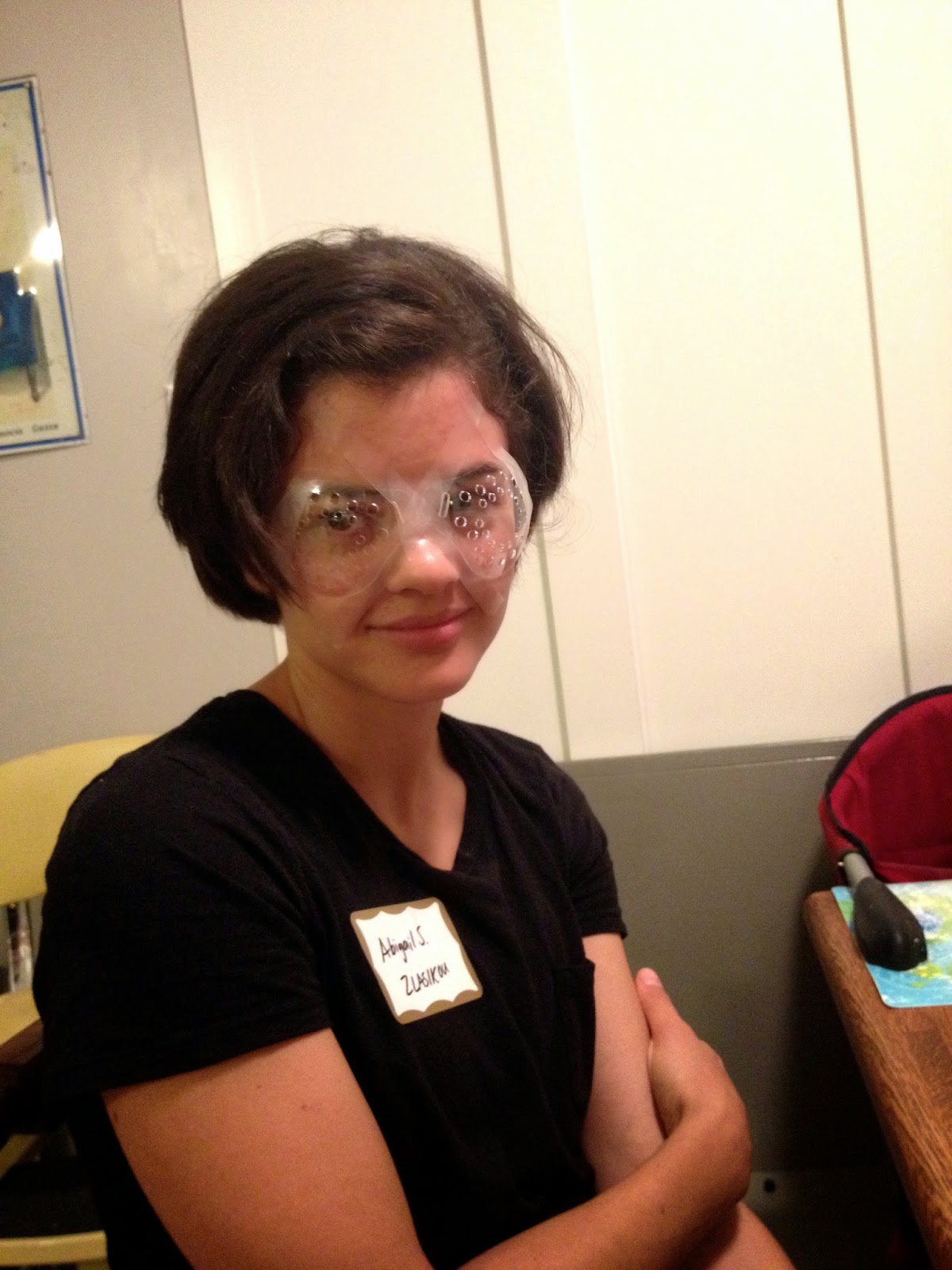 Great Aunt Gretchen said…
Thanks for the blog. I love knowing about how it all happened. Glad you have had such great success!!
April 14, 2015 at 2:16 PM

Steve said…
I read your blog with interest as I have been considering getting laser eye surgery. The idea doe seem a bit scary to me though. Congratulations on being brave enough to get it done. I hope you will see the benefits in the future. I look forward to reading more of your blog.