Comstock Chronicles: Farewell to the Rabbit 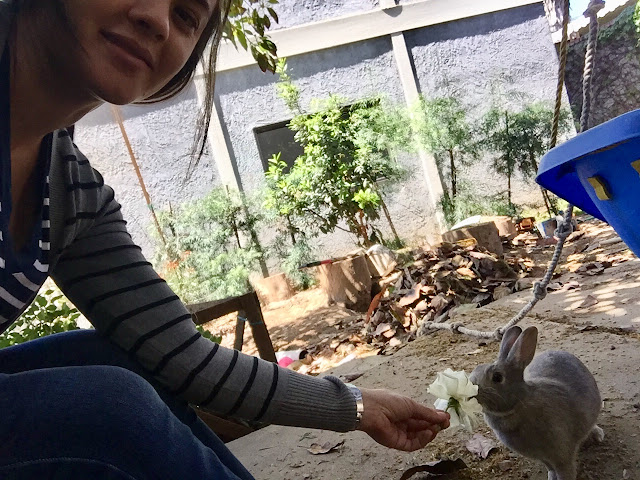 In the mornings when I throw open our bedroom curtains, I see our rabbit hunched down on the cement pad beneath our avocado tree. She stares at me out of one glassy eye and sometimes rises up on her hind legs at movement from inside. We’ve given up trying to chase her into her hutch at night; she's become too evasive. In fact, if she hears the screen door clatter open while she's nibbling grass pellets in her hutch, she’ll spring out so we can't trap her inside. Phil, pitying her joints, has put a ramp up to her door so that she doesn't have to leap the three feet to the ground.

Now we stand over the Amazon box with the labels still affixed to the sides. I’ve set the box in a hole I dug in our garden, and the children and I squat around it.

“Now you’ll have to tell us the last Bigwig story,” Rose says as she and Lee stroke the rabbit's soft fur.

I respond with some sort of agreement. I’ve made our rabbit more clever than an ordinary scrub-and-sage-brush-rabbit and more adventurous than an ordinary hutch rabbit. In my stories she has escaped from our backyard and disguised herself as a chihuahua and out-smarted coyotes and stolen vegetables from the neighbor’s gardens. I have immortalized her. Certainly, she can’t die.

Next to her stiff body, I’ve wedged a paper bag filled with a nest of celery strings.

“Some vitals for the afterlife,” Phil comments later as if we’d just buried an Egyptian rabbit.

“Why did you put that in there?” Rose asks.

The children see our neighbors setting up their front yard for Halloween. They’ve spread their front lawn with tables and chairs, a giant black-and-white snake and wine-colored curtains surrounding their front porch. Two houses up the street, our introvert neighbors have turned extrovert with their Disney-themed front yard. Later we see them dressed as Ariel, Eric, the fairy-god mother, Cinderella, Prince Charming, Hercules, and Belle.

“Bonnie!” Lee yells across the street. “Our rabbit died!” 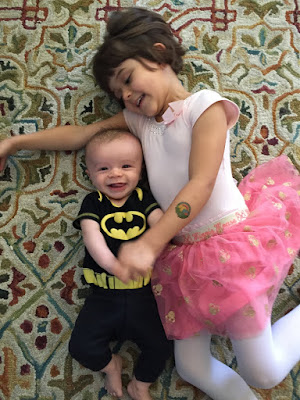 Our neighbors give their condolences as do all the people that our children tell. It seems that Bigwig's death is more news-worthy than their school's Halloween festivities that happened earlier in the day. Lee, dressed as a very serious Batman, marched in a school-wide Halloween parade with his fellow kindergarteners. And I accidentally sent Rose to class dressed as a ballerina only to discover that pre-school kids aren’t supposed to wear costumes to school. Rose reprimands me at pick-up time. 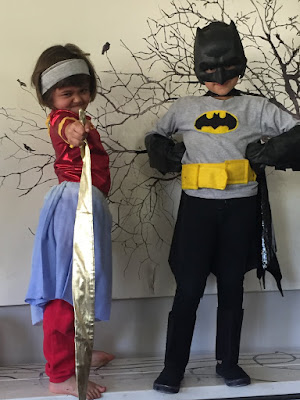 In the evening we have our Halloween bonfire, but neither Phil nor I are in the mood to do the traditional throw-a-stick-on-the-fire-to-earn-your-candy ordeal. Phil takes the children up and down our street before we let them hunker down with their candy bags around the fire. Lee shares his sweets with our fireside guests. Roses eats way more than her allotment as I later learn by counting the wrappers in her bag.

I sit in a sling chair with Benny and pass out candy to kids who either know the drill or stumble up to me, confused as their parents behind them urge them with, “Say 'trick-or-treat.' Say 'thank you.'”

Before the burial I open my journal and ask the children what they liked about Bigwig so I can write it down.

“She ate from our hands.”

“She was a good digger.”

“Mommy, can I touch her eyeball?” Lee asks stretching out a finger towards her still-open glassy eye.

I decide it is time to bury the box. But later Phil and I complete the list. 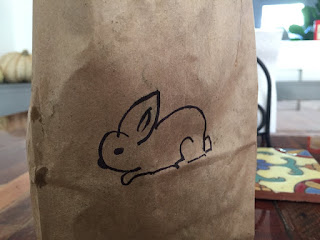 She sprinted around the backyard in the early morning, kicking up her legs wildly. She trimmed my roses and the skirts of the trees. She dug several holes under the gate but didn’t run away. She sniffed the piles of fresh dirt that Lee made as he dug with his excavators and dump trucks. She never bit anyone; although, she did use her kickers when we picked her up. She liked to lay sprawled out in the cool dirt behind the strawberry tree. She repeatedly began digging new burrows even after we filled in her holes. She stomped her feet when she felt threatened or when we forgot to fill her food bowl. She presented herself when we called her name.

Now she, along with Hazel in Watership Down, has gone with El-Ahrairah, that folk rabbit hero who invites the strongest and most clever rabbits to be part of his company.

One chilly, blustery morning in March, I cannot tell exactly how many springs later, Hazel was dozing and waking in his burrow. He had spent a good deal of time there lately, for he felt the cold and could not seem to smell or run so well as in days gone by. He had been dreaming in a confused way—something about rain and elder bloom—when he woke to realize that there was a rabbit lying quietly beside him—no doubt some young buck who had come to ask his advice. The sentry in the run outside should not really have let him in without asking first. Never mine, thought Hazel. He raised his head and said, "Do you want to talk to me?"


"Yes, of course," said Hazel, hoping he would be able to remember his name in a moment. Then he saw that in the darkness of the burrow the stranger's ears were shining with a faint silver light. "Yes, my lord," he said. "Yes, I know you."


"You've been feeling tired," said the stranger, "but I can do something about that. I've come to ask whether you'd care to join my Owsla. We shall be glad to have you and you'll enjoy it. If you're ready, we might go along now."


They went out past the young sentry, who paid the visitor no attention. The sun was shining and in spite of the cold there were a few bucks and does at silflay, keeping out of the wind as they nibbled the shoots of spring grass. It seemed to Hazel that he would not be needing his body any more, so he left it lying on the edge of the ditch, but stopped for a moment to watch his rabbits and to try to get used to the extraordinary feeling that strength and speed were flowing inexhaustibly out of him and into their sleek young bodies and healthy senses.


"You needn't worry about them," said his companion. "They'll be all right—and thousands like them. If you'll come along, I'll show you what I mean."


He reached the top of the bank in a single, powerful leap. Hazel followed; and together they slipped away running easily down through the wood, where the first primroses were beginning to bloom.

MommaMina said…
ABIGAIL!! You made me tear up Again. Don't we just long for eternity and saying no more good byes. I am glad BigWhig cam into your lives for a season. He enriched you all. and us too.