The Sins of Our Fathers 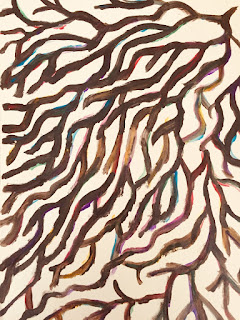 Let's suppose this picture represents several generations of humanity. Let's also suppose the colors represent the bad habits present in those generations. When looked at from above, we see mostly the brown introduced by Adam and Eve's sin at the beginning of time, but when we zoom in, we can see the color. That slash of magenta represents generations of finger pointing. Then there's that blue stripe representing hoarding. The blue goes away because of a family revival, but the blue pops up again further down the line in plenty of kings, dictators, czars and presidents. I could illustrate my own sins here too. Some of my colors were in the lines before me, and some have lain dormant for generations and my personality has now brought them out. Some, I am not even aware of because I disguise them behind the belief that I'm just trying to help or do a good job or something seemingly innocent like that. However, none of my colors reveal anything new about humanity. I haven't invented any unique shades of brown here. No one ever does. 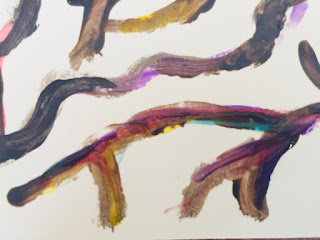 While the means for carrying out wickedness may change with inventions like the automatic gun or the automobile, the motivations for doing these things doesn't change: greed, envy, lust, gluttony, pride, vanity, hate, etc. Those sins are what's behind all the anti-social behavior. And those sins all stem from the same brown, that is, the same unfulfilled desires.

Within greed is a desire for power or security or contentment. Within pride is a desire to be declared good enough. Within hate is a desire for justice or truth. Within vanity is the desire to be known and loved. All the colors, all the unsociable behaviors are the top crust of an unmet need, an insecurity, so to speak. It is those unmet needs that are the brown coursing through history.

In some generations those unmet needs seem more colorful than other generations.

For example: let's say Anna grew up with parents who never told her they loved her. She grew up insecure and grasping for love. Perhaps she gave sex freely in search of love. At some point in Anna's life, she realized that her parents never gave her love and that was why she felt empty. Let's say she then stopped seeking that attention from boyfriends and discovered that God alone was able to love her unconditionally. Healing then began in Anna.

Let's also say that another gal, Betty, grew up in what we'd like to call a more healthy home. Her parents frequently told her that they loved her and that she was valuable and beautiful. And she believed it. Then she grew up and moved out. She noticed that the world was full of women more beautiful than herself, and that over time her beauty was fading. To build herself up, she pursued fashion and righteous living. She frequently compared herself to her friends to make herself feel better. It took Betty much longer to realize that her feelings of unloveliness could only be met by God. But finally, at the ripe old age of 70, she sought and found God's deeply satisfying love.

Both Anna and Betty were operating on the need to be loved, but the need manifested itself as promiscuity in Anna and vanity in Betty. Anna may blame her parents for her propensity towards promiscuity, but even if her parents had been kind like Betty's, Anna would still have had that unmet need to be unconditionally loved.

Anna became aware of her neediness much faster as is often the case among the "morally poor." Perhaps that is why Jesus said, "Blessed are the poor in spirit for theirs is the kingdom of heaven" (Matt. 5:3). Those whose antisocial behavior alerts them to their needs sooner than those of us who are unaware of our unfulfilled needs are in fact blessed. The many colors in their hearts serve as a catalyst for finding God.

The cure is not trying to scrub out the more vivid colors but addressing the sickly-brown within.

And here my analogy loses its potency because colors are good and beautiful, and I am using them to illustrate something corrupt and unwanted. A better illustration might be some sort of corrosive acid dumped into the soil around a tree. That acid poisons the soil and prevents the growth of healthy branches and fruit.

Regardless of what analogy you use, the cure is the same.

The only way I can no longer feel threatened by others more competent than myself is by having the ultimate authority declare that I am good enough.

The only way I won't hold a grudge when others snub me or patronize me or exclude me is by trusting that the ultimate authority is justly handling all these cases against me.

The only way I can no longer fear of making a decision or messing up my future is by having the confidence that no matter what choice I make, I'm still loved and God will always make good of it.

The only way I can stop worrying about my needs is by knowing that someone trustworthy is taking care of them.

The only way I can know what is best is by walking alongside the only one who knows what is best.

All our needs and insecurities are met in a relationship with the giver of all good things. Find him. There is no completion without him.