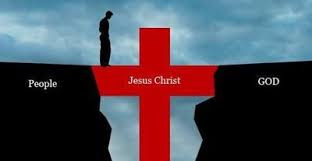 I have a tendency to think God is beside me on this side of the "goodness" chasm. I've chosen to believe, and I've walked across the bridge, which is belief in Christ's work on the cross. I've made it to God's side because Christ spanned the chasm between this side and that one. I'm God's friend now. I'm good.

But all those other people, especially the ones I don't like or who cause me to prickle, they're on the other side of the chasm, the "bad" side. I'm looking at them across the gap. And I shout at them. "You should come over here where I am! This is where God is! I'll be happy to tell you how to get here!" And then frequently I give them instructions that have nothing to do with Christ.

But what if this chasm and bridge analogy is good for understanding Christ's work, but not good for understanding our position? What if it's more like God in his mercy has brought all people over to his side of the chasm, that is, the whole world. He brought everyone over through the death of Christ, and now we are all reconciled to God. When God looks at us, he sees everyone through Christ's blood.

"For if while we were enemies we were reconciled to God by the death of His son, much more, now that we are reconciled, shall we be saved by his life." Romans 5:10 ESV

"Therefore, as one trespass lead to condemnation for all men, so one act of righteousness lead to justification and life for all men." Rm 5:18 ESV

I don't know about you, but those verses sound like God made things right for everyone, not just the chosen. I'm not saying everyone is heaven-bound and saved from a second death. After all, what kind of God forces people to be with him for all eternity? But it does seem like God's blood covers everyone's sins before they even believe. Sure, some continue to say, "No. I'm not reconciled. I'm not covered by Christ's blood. I'm not good enough. I've got to do something. I've got to prove to everyone how good I am."

If everyone has been brought over to the "good" side of the chasm, then when I wish to help someone, I don't have to shout across the chasm at them. Instead, I can put my arm around them and say, "Look! You're already here! Because of Christ's blood, you're good enough already. You don't have to cross that chasm. God has already brought you here. Isn't that great! We're here together. Don't you see?"

This brings me in close to the people that I'd like to separate myself from. They're not over there on that side being naughty. They're right beside me. We're standing together washed in Christ's blood.

Here's another analogy. Let's pretend God requires everyone to be painted red in order to be right with him. So God went out and painted everyone in the world red. Everyone. Some look down and say, "Oh, my God! I'm red! Woohoo! Christ did it!"

Others shut their eyes and say, "Naw! You can't be red. You're the worst of us! And I'm not red either. At least not yet, but I'm going to paint myself red and then I'll show you what red really looks like!"

It's like that parable of the wedding banquet in Matthew 22 where the king invites guests and they won't come, so he sends more messengers, and some messengers are killed, which I think is supposed to symbolize the Jews killing the prophets and eventually Jesus. So then the king burns the city of the wicked people (the Jews and Jerusalem perhaps?), and orders his servants to gather guests for his banquet from the streets.

"And those servants went out into the roads and gathered all whom they found, both good and bad. So the wedding hall was filled with guests." Mat. 22:10

Everyone was admitted to the party!

Then the king at the banquet discovers that some haven't put on proper wedding clothes, which I think could mean that they haven't believed in Jesus, they haven't put him on (Rm 13:14), so they must be thrown out because "many are called, but few are chosen." (Mat 22:14)

When I became a believer, I think I was believing in something that had already been done, not something that would only be done after I said the words. Otherwise, I don't think it makes sense that I could say them. What I mean is I must already be painted red in order for me to believe that I am. It makes no sense to believe I am red and then for the red to appear. That's like this dream I frequently have that I can fly only if I believe it, but if I don't believe it, I fall flat on my face. Anyone else ever have that dream?

Anyways, this could really alter the way someone witnesses. We're not trying to convince others of what their position before God could be, but what it is already.

I think this also coincides with how Grandpa Seelye used to lead people to Christ. He used to read them 1 Peter 2:24 and ask them where their sins were. And if that person could understand English and were relatively cooperative, they'd say on Christ.

"He himself bore our sins in his body on the tree that we might die to sin and live to righteousness. By his wounds you have been healed." 1 Peter 2:24.

Yes, I realize some verses seem to contradict this. Not sure about those yet. Will have to think some more . . .

ShackelMom said…
I think there is another class of people for which Christ died, and they are the ones who say, "Red? Never! I will be blue until the day I die, and proud of it!" or "All colors are good. Don't talk to me about red as if it mattered." But their answer is still what you have said, "Nope!"
August 16, 2019 at 12:19 PM