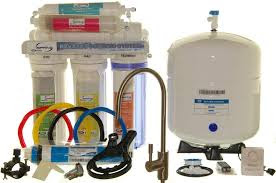 I went shopping at a hardware store for a reverse osmosis system. I asked a passing store employee, who also happened to be the store owner, which system was best. He guided me to what I needed, and I was glad to see that it would only cost me $235. That was well within my budget, so I loaded the system into my cart and headed to the cashier.

On my way, I ran into a man who looked like a plumber. He saw what I had in my cart and said, "Those don't work. I had one, and the water tasted terrible."

Needless to say, I was concerned. He would know. Right? Perhaps I'd chosen the wrong system. So I went back and found the owner still in the water systems aisle.

"Oh no," he replied when I repeated what I'd heard. "This system will do the job. You just have to change the filters periodically or else your water will get a funny taste. The instructions and filter schedule are all inside. This one will give you the absolute purest water. I used to be a water chemist and so I know. You live in Whittier?"

"Yeah, you've got pretty awful water, but this system will purify your water better than bottled water."

That was enough to convince me of my decision, so once again, I headed for the cashier.

On the way, I bumped into a frumpy store employee who raised her eyebrows at my selection. "You going to buy that one?" she asked whistling. "The cheaper one does just as well."

"$235 doesn't seem bad to me," I replied. I didn't mention that I don't trust those cheap models.

I was aghast. Uh-oh! Had I read the label incorrectly? There's no way I was prepared to drop that kind of money.

"Yep, see." She ran the item under the in-store scanner and sure enough $2,305 appeared on the screen. 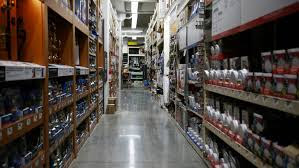 I turned right around and found my way back to the water systems aisle. The cheap one didn't seem like such a bad idea anymore. I suppose I shouldn't have been surprised to find the store owner still there. I explained what I'd discovered, and he smiled and laughed.

"No, no," he replied. "It doesn't cost that." He wrote something indecipherable on the box with a sharpie and then said, "Just have the cashier call me if she rings up a different price."

I was a little confused. His scribbles looked anything like numbers, and most definitely the cashier wouldn't be able to read it. However, at this point, I was beginning to feel self-conscious about asking him so many questions, so I decided to just go to the cashier and find out.

While waiting in-line I encountered yet another worrisome customer. I could see her eyeing my cart and making critical evalutations about my purchase. I decided to stand up for myself.

"It's for clean water," I explained. "It goes under the sink."

She smiled in a patronizing sort of way. "I know. I had one for years. But I got tired of changing out the filters, so now I have Sparkletts delivered to my door. It tastes better anyways."

The man just behind me heard all this and laughed. "I used to drink from the hose all the time and it never did me any harm. It just made me stronger. Kids now-a-days get sick for nothing. I never get sick! Ha!"

At this point, I was feeling rather wretched and angry. Why was everyone so bent on convincing me that I was making the wrong choice? I really wanted to disappear, either that or have the store owner defend my choice to all these people.

He must've been reading my thoughts because I spotted him just beyond the cashier with a clipboard and a pen. He was busy at the return's desk. Once he caught my eye and smiled. After that, the customer's comments didn't feel so threatening. Maybe they didn't need a reverse-osmosis system, but the store owner knew what I needed, and this system was the right one for me. Who cared what the other people thought?

When I handed the cashier my system, she took one look at the sharpie writing and smiled. "You're all set. Shall I put it in a bag?"

She laughed. "Oh, no, no. This one costs much more than you'll ever be able to pay."

I tried not to be offended at this. How much money did she think I had? I wasn't poor, after all.

"That's why it's free," she went on. "Just don't forget to change your filters every 9 months."

I think I walked out of that hardware store in a daze. I must've looked completely shocked because an elderly man asked if I was okay.

"Yes," I replied. "I've just been given a reverse osmosis system for free!"

The old man raised his brows. "Nothing's for free. Believe me. When you've been alive for as long as I have, you'll know. You just wait until they start calling you from collections. You live in Whittier?"

"You're going to need much more than that water filter to clean your water." Then he left me there.

Yes, I went back inside to speak to the owner. And I intend to keep speaking to the owner until the naysayers and doubters and head-shakers and scoffers and just-generally-confused people are unable to knock me off balance with their judgements because I actually trust what He says.


*The events in this story did not happen. This is an analogy to our doubting what the Lord says about His work on the cross.

Abigail Joy Stevens said…
I should've mentioned, Pati, that this story is an analogy to how I doubt what God says about me, my salvation, and His work. So it's a true story but not what it seems.
February 17, 2020 at 6:57 AM