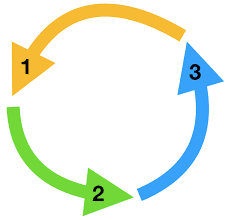 A few weeks ago Phil's cousin, Heidi Dehart, explained an argument cycle to me, and I'm finding it so helpful that I'm writing it here. Who knows? Maybe it'll help other parents.

The argument cycle begins with a disagreement. Big brother found little sister's fake jewelry laying on the couch, and he took them. She begins to scream. (By the way, my kids are 8 and 6.)

Usually at this point I interrupt because screaming is unpleasant and not the way to discuss a problem. But interrupting an argument at this early stage, robs my children of an opportunity for them to work through their emotions, listen to one another, come to an agreement, and make amends.

I have found that when I interrupt, they rarely listen to me because they're too mad, and the anger that was previously directed at the brother or sister gets transferred to me. The trick is to only interrupt the cycle if we believe their argument will permanently damage personal property or their relationship. This is a hard thing to do as a parent. In fact, I send my children outside to fight because I can't stand it.

So back to the cycle, my daughter starts screaming at my son. He then goes and hides her jewelry where she can't reach it. All the while, she calls him names. In the end, she slaps him with her jacket and he pushes her down. They cry and their anger is spent.

Again, the temptation to interrupt at this point is overwhelming. They are doing each other physical harm; that is not okay! Unfortunately, I've found that when I physically interrupt, it's usually out of my own anger or fear, and I don't make things any better.

If they don't already know what to do next, we must teach them. "In our house, we don't call names or hit. You both have broken the rules and need to make things right before you . . . (continue playing, come back inside, have your snack, etc.)" This outlines the rest of the cycle for them.

The children each need to say what they originally wanted and what they did wrong. "I wanted to play with your jewelry so I hid them and pushed you down." Or "I didn't want you to touch my jewelry so I called you names and hit you with my jacket. "

Next, the children apologize and discuss a solution to their original problem. If they can't come up with a solution, Mom may have suggestions. I also have my children hug, do an act of service, or say 3 kind things to one another to make restitution.

After children have completed their argument cycle, then it's appropriate to give consequences for name calling or physical violence. Note: teaching our kids that hitting and name calling is wrong doesn't mean that we stop them from doing these things, except in the case of possible permanent damage. It means that when they choose to do them, there is a consequence. We want our kids to learn that violence and name calling result in much hassle and repair work so that next time they might not resort to these things.

Yes, this whole thing takes time, and teaching it will most likely take us moms away from something that we'd much rather do. But once the kids know how to complete a cycle on their own, it actually frees us from having to make peace for them every time there's a tiff.

I think the same sort of cycle can work when grown-ups argue—couples, co-workers, and friends. In fact, the other day I realized I was interrupting the cycle between my husband and my children. I didn't like the way it sounded, so I jumped in.

If the cycle is constantly interrupted, the children (or adults) don't learn how to work through their anger and disagreements. And if you're doubtful about the effectiveness of this method, just check out how often God interferes with our arguments and makes us behave. Not a lot.

So there you have it.

Disclaimer: Sometimes the cycle can't be completed because someone stayed up too late or is ill. Also, we have yet to master this cycle, but I have hope that one day we will.

David Cox said…
Excellent! Love the point that God doesn't usually jump in but wants us to work things out with His wisdom. Helps if we have sought Him for His wisdom that He promises to give if we ask in faith.
August 21, 2020 at 9:26 PM