The High Price of Doing Good 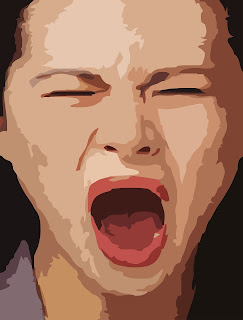 It seems like bottling up our anger can have the same corrosive power in our souls as venting our anger.

Let's say two sisters are fighting. The older is venting and expressing her anger with rude comments and unfair accusations while the younger one holds her tongue and grits her teeth even though, inside, she is equally as angry. The younger one has seen the destructive power of expressing anger like her older sister has and she has decided it's ugly and hurtful and wrong. She has decided she will not do it, and she is right to hold her tongue. She makes the world a nicer place for others. But as the older one goes on with her day and forgets the whole matter, the younger one broods and holds a grudge against her older sister, and her anger seeps out towards others in small simpering ways.

Are either of them better off? Has sin been less corrosive within either of their hearts? The older one holds no grudge but has left behind a world of hurt. The younger one didn't shout but is left wounded and resentful.

I think they are both in the wrong: the oldest didn't consider the younger's feelings; the younger didn't forgive the older. In both cases their anger turned them into something more beastly than heavenly. Both acted against the law of God. Both are guilty of a crime against God.

And yet, anyone watching the fight would say the younger did the right thing. The younger acted composed and restrained and more mature. It's quite possible that after the argument the younger sister even told herself this. "I wasn't the one who yelled and screamed. I didn't say those awful things. I kept quiet. I did the right thing." Or she might defend her right to be angry, "Do you know what she did to me? That was wrong! My anger is a righteous anger. God himself is angry at her for what she said."

Sometimes I wonder if we are most defensive when we're trying to prove how right we were, that we don't need Jesus as much as someone else.

In the case of the sisters, both needed Jesus. Both acted from feelings uncentered upon the Lord. The older one acted out of her sinful passions. The younger one did what she felt was right but then couldn't pay the price. She didn't have it in her, so to speak. She behaved in order to be better than her sister or to appease her guilt or earn God's favor or because she felt it was the right thing to do. But her resentment proves that she couldn't sustain that goodness.

This compels me to believe that doing the right thing without a right heart takes just as much out of us as doing the wrong thing. The price is just as high. In other words, paying what we don't have is the same as stealing. I realize this may not be true in the financial world, but it seems true in the moral world. We cannot handle the cost of goodness upon ourselves. Later, the creditors come calling, and we realize we weren't actually acting out of the abundance of love within us at all.

As a mom, this is all too easy to do. I know it's right to not rage against my kids when they complain or speak disrespectfully to me. I need to discipline them, not rage against them. But so often I find that I can't keep the anger inside without paying the price. I resent the cost upon my time and emotional energies.

The fact of the matter is we don't have the account to pay up the righteousness God demands. That's why we need Jesus' righteousness. If the younger sister was in the midst of her fight and she knew the right thing to do, that was the time to call upon Jesus. "Lord, I know I shouldn't yell and say such things like my sister is doing right now, but I can't do this on my own. Do it for me, Lord. Be my righteousness here."

Instead, she figured she could do it herself. She trusted herself. She drew upon her old account. The Bible calls this the life of the flesh. But she didn't have to do that.

Those who are in Christ are connected to Jesus' boundless account of goodness, and with his goodness, we no longer need to fear about making sure our motives are absolutely perfect. We can act with the confidence that Jesus will pay it for us. He will make it good to God and good for us. Whatever feeble attempts at goodness we make are pleasing to the Lord.