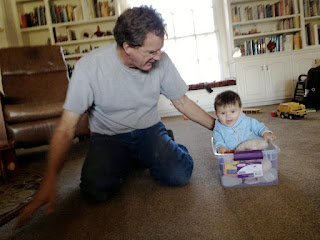 My dad taught me to jump off high up places. He taught to me to question the automotive repairman, that scars are trophies, that “clean” is relative, and that some candy tastes best when slightly stale.

He used to point at trees or radio towers or rocks and say, “I bet you could climb that.” He still makes the best wilderness eggs: all runny in the middle with a crust around the edges, fried in bacon grease with a side of spuds. He sees difficulties as adventures, summits as destinations, and the wilderness as his living room. And still, he was man enough to see the Swan Princess with me when I was in grade school.

My dad is a desert kind of guy. On multiple occasions he drove his motor home down roads that caused the drawers of cooking utensils and the cabinets of snacks and even the refrigerator door to swing open and vomit paraphernalia onto the plastic carpet runners. His goal was to find a location where we could see no signs of civilization. This was probably done in order to light off illegal fireworks. Though, he did explain that if you’re going to do the deed, you’ve got to take responsibility for it. Thus, he reported and gave up his hundreds of dollars worth of fireworks to the ranger at the Canadian border while we kids sat quietly on the couch and felt so sorry for poor Daddy.

He has never been unclear about his expectations: all kids must be on the motor home’s couch or on the back bed when at dump stations, all toys left out at home will be confiscated or thrown away, Saturdays are yard work days, no boys in girl’s bedrooms, and absolutely no man, woman, or child shall be shown mercy in the game of Risk even if they cry. Nothing could tame that driving desire to conquer the world, even if his only son owned South America and his oldest daughter only wanted to hold onto the Pacific Islands.

My dad knows how to execute plans. He knows how to research a project, get others excited about it, and be the driving force that accomplishes it. He read about rocks, and showed us how to find geodes and quartzes. He read most every display in the historical or geographical museums where we stopped on vacation, and he sought to dumb down the language to explain it to us kids. He took us to tour the Jelly Bean factory and gave us the money to invest in the dentist’s chair. He would look at us with bright eyes when thunder shook the motor home.

He taught us that grades and sports mattered very little in the real world, but finances and being an alert driver mattered much. He had a soft spot for animals, though we might not have known it based on his firm discipline. He loved a good dog that could walk the trails with him, bark at helicopters, and “stay” on command. Cats were tolerated too so long as they caught their fair share of rats. And even though the rule was no animals in the house, he came to allow the cat to sleep in my room.

He has never stopped learning. However, he has yet to learn that even though he poo-poo’s Father’s Day, this daughter will still use the day to admire his strengths, appreciate him for his faithfulness to his wife and family, and thank him for his example in so many areas. Happy Father’s Day, Daddy.