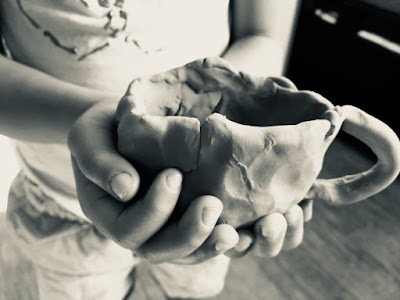 It's impossible to fill this little cup I'm cradling in my hands, collecting from acquaintances and total strangers, You'd think I could fill it with what I get from those closest to me—fill it with affirmation, that is. But some give so much that it all splashes out, and others don't seem capable of giving me anything but sand. Judgement: that's the sand. I can hardly stand next to sand-sprinklers anymore. It's just too painful. I put my cup away around them.

But I'll take a few drops from a facebook compliment or an interested look from a man driving by.  I can manage a bit on Sunday mornings if I dress nicely or get someone to take my advice or bump into a friend who enjoyed a recent blog post. Of course, I'll squeeze the juice out of someone who mimics my methods. Copying is the greatest compliment after all, right? But it's a tough life as a stay-at-home mom. There's just not very many opportunities to collect. And big social gatherings seem to highlight the fact that my little beggar's cup is empty and no one seems interested in filling it.

I'd like to think that if I had a fulfilling job, if I had more thankful children or was just put into some sort of leadership position where people looked up to me, then I'd be able to fill my cup. People would see that I was capable and admirable and great. But no. I know it'll never be enough. It doesn't fill. It doesn't satisfy. It's not even water that these people are giving me but breathes of air, words, sentiment. How can anyone fill up on that?

So I've decided to drop my beggar's cup and pick up the hose. That bit is hard to explain because I don't really pick up the hose at all but become part of it. And I don't fill up on water; I let it course through me.

See, it's this abiding that does it. To live in the understanding that Christ has said that I am enough means to abide in Him. To abide in Him is to keep His commandments. To keep His commandments is to love one another. To love one another is to be the giver of water and not the beggar of water. You see the paradox. Right? I'm empty. How can I give water if I'm empty? How can I give water if my hands are busy begging. It's by dropping the cup.

And picking up the hose.

I can only stop seeking from others if I'm giving, and I can only give if I've got my whole body wrapped around that hose. Actually, I must be the hose. By all accounts it seems impossible that I would have anything to give, but I can because I'm not giving from my own stores. It's just passing through me. That is why this sort of giving doesn't exhaust, doesn't ask for reciprocation, doesn't keep track, doesn't get disappointed, doesn't give up, doesn't let up, doesn't get used up. It never fails.

When I am wrapped around that hose, I forget about my cup and my begging. And that's not because my cup is full. It's because the movement of water through me has altered my purpose. I'm no longer a beggar and collector. I'm a channeler. I'm a giver.

I wish I could better describe how to do it—this faith, that is. But that's all I've got. Drop the cup. Give up. Pick up the hose. He can through you.

And when that water is coursing through you moment by moment, you have no fear of sand-throwers. You can stand by them and douse them with water without fear of getting grit in your mouth. You are unmoved by flattery or naysayers. You don't fixate on the kind words either. None of it sticks because you are not begging, and your hands are full.

I definitely suggest trying it. But don't do it because I tell you to. Do it because Christ said so, and because it's the only way.