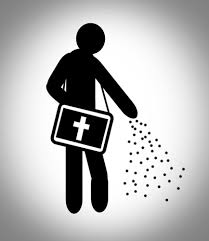 Type One: The Reformer
I evangelize because this world is in desperate need of God's reforming program. I mean, I'm on board with anything that's going to decrease the number of stupid people in the world. The only trouble is getting people on the right track faster.
Type Two: The Helper
Ever since I came to know Christ, I've had this ability to see what others really need. See, I can't really stop myself from helping others know about Christ's way. "Sigh" I've sacrificed so much to help others and it hasn't quite turned out like I'd hoped.
Type Three: The Performer
One of the signs of a real Christian is that they tell people about Jesus, so I have a mental list of all the people I've evangelized and how well they're doing. They're all doing really great!
Type Four: The Individualist
I'm not really into typical evangelism. I mean, I don't want people to think I'm just another obnoxious Christian. So I have this ring that symbolizes my relationship with the Lord that I got back in seventh grade from summer camp. And my license plate says BRN2IC, which stands for born twice, which was my church group's motto when we went on this amazing retreat to Yosemite. And if anyone asks me about these things, I can tell them how God has totally changed my life.
Type Five: The Observer
So, I know I've read Evidence that Demands a Verdict and Mere Christianity and The Reason for God and A Case For Christ and others, but I don't think I'm really prepared to evangelize. I probably need to get to know my audience better before I say anything. After all, I don't want to look stupid.
Type Six: The Guardian
I sell people car insurance, health insurance, fire insurance, and even pet insurance. Why wouldn't I sell them eternal life insurance? There's no better way that I can protect my loved ones from everything and anything. And there's no better way they can get into this community that just helps us live better than the average Joe.
Type Seven: The Enthusiast
Haven't you heard that we can either spend eternity in pain and suffering or with a bunch of really cool people having a really cool party? The more the merrier! How can I get more people in?
Type Eight: The Challenger
Look, if people don't know the truth about who to follow, they'll follow any old news reporter, government leader or just mislead friend. We gotta inform people so they're protected against those that would use and abuse them. I know the truth and I can tell you it. But if you choose to ignore me, don't expect me to feel sorry for you when calamity strikes.
Type Nine: The Peacemaker
Well, I don't wanna make anyone feel uncomfortable . . . I mean, I'll tell people the truth if they ask, but otherwise I think I'll just keep quiet. I don't really know what to say anyways.

"If I speak with human eloquence and angelic ecstasy but don't love, I'm nothing but the creaking of a rusty gate. If I speak God's Word with power, revealing all his mysteries and making everything plain as day, and if I have faith that says to a mountain, 'Jump' and it jumps, but I don't love, I'm nothing. If I give everything I own to the poor and even got to the stake to be burned as a martyr, but I don't love, I've gotten nowhere. So, no matter what I say, no matter what I believe, and what I do, I'm bankrupt without love." 1 Corinthians 13:1-7 The Message